I have been asked several times about my culinary background, so here is the short-long story: The ‘slow food’ movement may have been created in Italy 20 years ago, but 30 years before that, in a small Romanian town in the province of Moldova, called ‘Falticeni,’ I had been born and raised in such a ‘slow’ culture. I was fortunate not to know of canned soup, boxed ‘Mac and Cheese,’ or any other processed foods. The term ‘organic’ hadn’t been coined yet, because everything was grown organically. The flowers were fragrant and the fruits and vegetables had real flavour; nothing was modified or altered.

My mother apprenticed at my grandmother’s kitchen table, and together they baked bread, made their own egg pasta, cakes, pastries, Rugalach, borsht, stuffed tomatoes, peppers and vine leaves (with rice and ground beef), and many other amazing and mouth-watering dishes, which of course, as a child I often failed to appreciate. Nonetheless, at a deeper level, I did apprehend the seriousness and importance attributed to cooking and food. Everything was cooked on a coal-fired stove, baked in a wood-fired oven, created by hand from scratch, without the benefit of electric kitchen equipment. The only electric source was for lighting, and fresh water wasn’t available in the house. As soon as I could walk by myself and carry anything beyond my body’s mass, I was put in charge of carrying fresh drinking and cooking water in an enamel metal bucket, from a hand-cranked pump located at the end of our street.

The Romanian culture has strong Italian and French influences in its spoken language and art, and its food is similar to the rustic cuisines of Tuscany and Provence. I still remember the vegetables in the ‘Givechi’ (Ratatouille) that were cooked individually in order to maintain their individual texture, and then assembled together so all the flavours could be absorbed The creamy, hot ‘Mamaliga’ (Polenta) was alternately layered with rich butter and a hard, sharp sheep’s cheese, creating a symphony of flavours. Any leftovers were baked and turned into croutons that were served with sweet milk for dinner. Nothing was wasted. 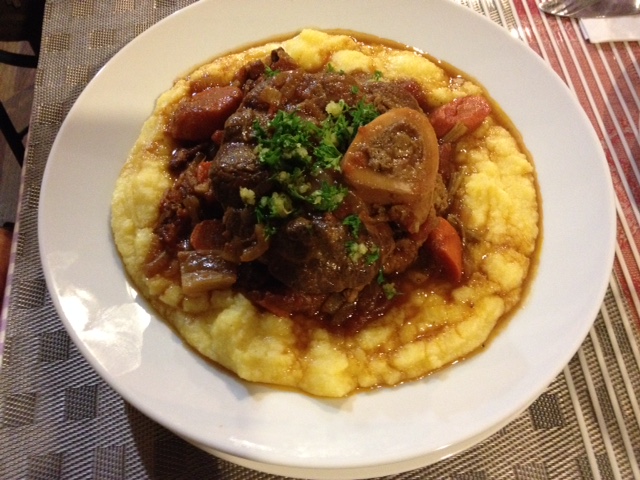 As well, the once mighty Austro-Hungarian Empire left its mark on Romanian cuisine with the rich Goulash stew, the Viennese Schnitzel, and the amazingly multi-layered Dobos torte. The pinnacle of its legacy was the Viennese Strudel, whose pastry was stretched so thinly that you could actually read a newspaper through it.

As a child, I was an active participant in food preparation, pitting cherries for making jams, cleaning the grapes for the wine, rolling pasta dough, patching-up holes in the Strudel pastry, etc.

The shelves in the state-owned stores were always empty, and a thriving black market became the official food source. Farmers would bring their crop directly to people’s homes, and the strongest alliances were forged with the butcher and fishmonger. Meat was smoked, herrings were preserved in salt, pickles were made in large wine barrels, sherbets, comfitures, and jams were crafted, including a few ‘exotic’ ones like tomato, bitter black cherries, and red rose petals that tasted like a whole rose garden in your mouth; wine was fortified with sugar to age gracefully and turn into Brandy, raw milk was inoculated in order to make Kefir, buttermilk and yoghurt, and all remedies were made from vegetables and herbs.

The attention to food was also extended to the meals themselves. These would be slow and long to allow for proper digestion. Meals were a time to gather the family around the table and to be joined together, in a spiritual fashion. It went beyond just feeding the family’s basic food needs; it was a labor of love, passion and dedication.

Life was hard. Living under a totalitarian, communist dictatorship regime that alienated its citizens, took its toll on the population. Yet, paradoxically, the only thing that could kill you in those days was the regime’s dreaded secret police; the water, air and soil were clean, the food was healthy, and even in its hardship, life was simple and good.

It was a time when men were real men, chivalry prevailed, and (almost) every man was a gentleman. This happened not so long ago, in a different era. I’m sure many of you carry similar fond memories. . .

I know this Romantic époque cannot be revived today, but rural life in the beautiful Okanagan Valley, with its proximity to fresh food and wine-making has evoked many memories of my childhood, and inspired me to bring you some of my grandmother’s excellent recipes, in her rustic, unpretentious style, and in the warm spirit with which she imparted them to me.

A whole new food chapter began in my life at age 9 when my family immigrated to Israel and I experienced the exotic tastes and smells of the Middle East and the Mediterranean!!! . . . To be continued. . .