I don’t like air travel, and not because of a fear of flying:  it’s about the noisy children, loud adults, crowded spaces, security checks, lengthy delays, lost luggage, the endless parade of passengers in the aisles, extremely expensive yet mediocre airport food, etc. Otherwise, Captain Kirk’s ‘Beam me up Scotty’ would best suit my discerning lifestyle. However, until such technological feats take place, I’ll have to put up with overbearing and stern flight attendants, and the annoying view of the privileged passengers in the business and Plus classes, their extra-wide reclining seats with enough leg-room to park your check-in luggage, and the complimentary drinks, food and tiny white hot towels they receive from the attentive and smiling, (yes, smiling) staff. Instead, they should be relegated to the back of the airplane so we plebeians could feel more comfortable in our skins. I would prefer spending our vacation at home, reading a book, watching the snow fall and throwing another log on the fire.  However, Sharon doesn’t trust me. She knows that after awhile, I’ll feel the itch to sneak out to Walla where work beckons and there is ‘always something to do.’  She knows . . . women know . . . they always do . . . and then their maternal instinct takes over and they try to save us men from ourselves.  So here I am, twelve days and 6000 km. away from home, standing on a beach in the Mayan Riviera. It’s early morning, the sun is still low on the horizon and the air is cool, but nothing compared to the chill and snow we left behind in Naramata.

After devouring five books and four food magazines in recent days,  I’m restless and start looking for ‘trouble.’ The music in the headset is on ‘shuffle’ mode, gently switching from Pavarotti’s ‘Nessun Dorma,’ Maritza’s soulful Fado, to old Hebrew songs that bring back memories of home. The music is at the perfect level, muffling other people’s conversations while letting through the endless ocean sounds. 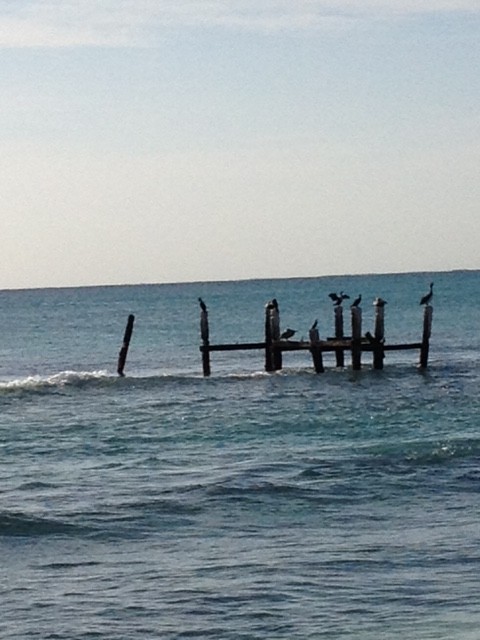 The nearby water- sports building bustles with activity, resembling a hive with yellow and black-clad workers who look like busy bumblebees as they refuel sea-doo’s and load oxygen tanks on the large flat-bottom boats. These will carry the men and women dressed in dark wet-suits in full diving gear, who appear like battle-hardened veteran navy-SEALS going out to the treacherous sea, and I wonder if any of them will ever return from the dangerous mission of hmm…swimming with dolphins and sightseeing at the nearby coral reef…

Mercedes Sosa’s ‘Alfonsina y el mar’ sounds more poignant than ever with the gentle sound of the waves breaking against the beach. Once in a while I put down the pen to sip from the tall cappuccino and watch the local beach vendors offering everything from silver artisan jewelry, Cuban cigars, Havana hats, sunglasses and sombreros to hand-woven carpets – all in hard U.S. currency. A few fluffy clouds linger like lost lambs separated from their flock. The beach becomes quiet for awhile; waves gently move, capped with frothy milk-like foam, while cruise ships appear on the horizon, heading towards Cozumel.

The serenity is temporarily broken by another group of ‘SEALS’, leaving for their dangerous mission of ‘Snorkel with Turtles’ or ‘Dances with Wolves’. The brown pelicans finally take off from the wooden structure located about 500 ft. from the beach. They have been perched there since early morning, frozen in different positions as though carved in the wood itself. Slowly gaining height, they flap their large wings and majestically glide in circles, often appearing motionless, suspended in time. The scene looks serene and pastoral but it’s deceiving: their intent is to constantly scan the waters below for prey. Suddenly, they collect their wings in battle mode formation and dive at high kamikaze speed for the catch-of-the-day. This balancing act of precise aerodynamic maneuvers, tactics and pure elegance, is taken no less out of Sun Tzu’s ‘The Art of War.’ They are seafood eaters – but different than their loud, junk-food, beach-crowding winged brethren – the seagulls, the lawless birds that know no limits and are as noisy as their human counterparts; once they discover any evidence of food in your possession your serenity, calm and peace are doomed. You are instantly and constantly surrounded by agitated and screaming flocks, circling around at an alarmingly close distance, reminiscent of Hitchcock’s ‘The Birds’; lunch is now served! 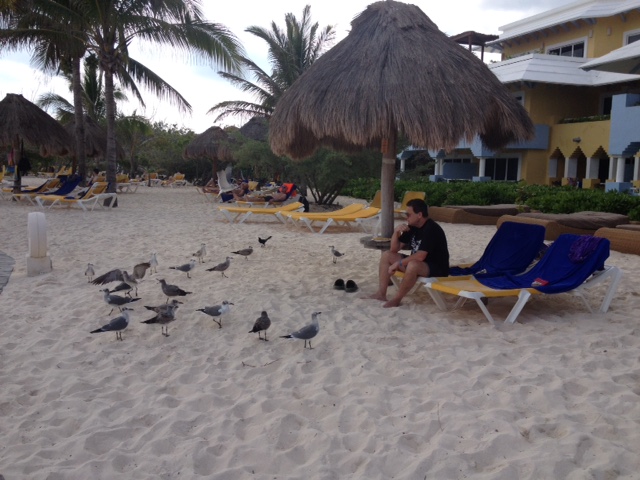 All around, young and not-so-young bodies are adorned in a myriad of tattoos; which begs for the inevitable question – what is the point of having a miniscule butterfly inked on your flabby cheek (which you cannot see), and having to wear a ‘teeny-weenie-yellow-polka-dot-bikini’ in order for others to enjoy the ‘masterpiece?’ But hey, what do I know? After all, I’m just a baker!

The ear catches different languages and dialects. Every person on this beach, lying on the blue toweled chaise long – is here for the same reason: sunnier and warmer weather, different from their place of origin. They lie there like the cold-blood iguanas and bearded-dragon lizards which can be found perched around the pool area, worshipping the Sun-God.

The sun is now at its Zenith and grey clouds gather at the horizon. Sometimes it rains for short periods and then the sun peeks from behind the dissipating clouds – first, hesitatingly as if debating the right of showing its unabashed glory in January. The tropical vegetation and the beautiful gardens appear to be content, since light and water are the quintessence of life. The pelicans gently float motionless on the rolling waves, seriously looking down their long bills, with an air of self-importance. The presence of clouds makes the sky appear somehow lower and conveys a feeling of intimacy. At some point in time, the sounds and visions morph into a spiritual experience and I cannot help but wonder how everything around me, in this flawed world – appears to be so perfect. . .

As times passes, I realize that I have stopped writing and have entered a meditative state, while the story continues taking place in my mind. By now, the sun has set, the beach beginning to empty of sun worshippers, and all the ‘SEALS’ have been accounted for. As twilight descends, another magnificent day at the beach has ended. . .