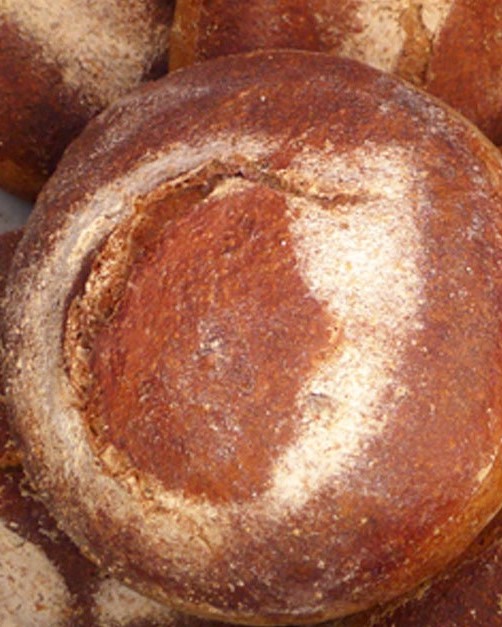 What do you call a bread that has everything?

During the bread making process, I always make a larger dough quantity than needed. The idea behind this is to be able to hold back a piece that will later be introduced in the next batch. This ‘Old School’ practice guarantees a deeper flavor profile, because it enhances the sourdough that slowly ferments at lower temperature in the cooler and is constantly fed and nourished by temporarily (three days) being part of the main batch. This ‘extra’ piece is then retired to a bin where it waits for its turn again. Some of the dough in that bin is a continuation of the first loaves I baked eight years ago. With every bite of the crusty loaf baked today, there is a memory of the past when I started my journey as a baker.

The problem is that over the years, the quantity of this extra dough has slowly increased to the point that I now have to use larger bins (eight in total), which occupy much needed refrigerator space. It’s time to clean the cupboard, and since unusual problems call for unorthodox solutions, I have decided for one time only to craft a unique loaf:  I will use this dough made with different modern, heritage and ancient flours and textures to create a loaf that will represent Walla’s pantheon of breads.

As I put pen to paper, or rather finger to keyboard, the dough is on it’s final four-day fermentation leg, ending an eight year journey. I’m a bit anxious regarding the outcome, but hopefully it will be a memorable experience (the bread was baked on Sept. 12, 2015).