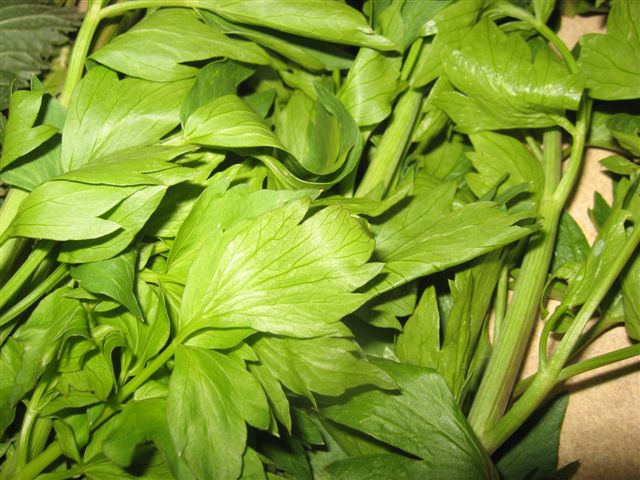 Farmer Steve from Olalla usually comes by unexpectedly and brings whatever he managed to pick that day. Since both of our roots are in eastern Europe, we often reminisce about the ‘good ol’ days’, where food was ‘real, simple and tasty.’ After our last schmoozing session, when we lingered over childhood memories of Stinging Nettle and Leustean (a.k.a. Lovage), he showed-up carrying a loaded box filled with green Nettle, Lovage, Horseradish, Parsley root, large black European radishes, beautiful beets, eggs and a few other ‘exotic’ items that he manages to grow, including monster- size carrots that spent all winter long deep in the ground getting fatter and fatter.

My childhood in Romania was ‘peppered’ with many fond food memories, including the day when I stumbled into a field of stinging Nettles and returned home with legs covered in rashes. In no time I left home again for my next adventure, where I met Paraskiva, the peasant lady who was living with her family in the backyard of our property. She was toiling over a clay stove in an outdoor kitchen, where a black cast iron pot was hanging above a fire. The wafting aromas stopped me in my tracks; these were no ordinary smells of garlicky beet and potato borscht, or golden chicken soup and matzo balls, but of a new, different, simple and yet complex scent. She explained that it was a Nettle and Leustean ciorba (peasant soup), sat me in her lap and handed me a rough clay bowl filled with green liquid where a few leaves of the dreaded Nettle were gently floating. Eating with a coarsely carved wooden spoon was not an easy task for a five year-old, but in return I was rewarded with new and exotic flavors, never known before in my gastronomic pantheon. The flavors have remained with me ever since, and thanks to Steve’s green thumb I was reminded of my childhood this week as I stood over my soup pot.