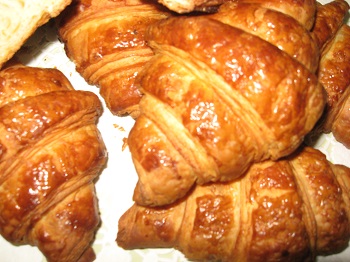 Croissants… What do the Industrial Revolution, the Titanic, the Orient Express and Croissants, have in common?. . . . Steam, my friends, steam. . . .This magical and mighty energy is released when water reaches its boiling point. Steam has the power to move large industrial turbines, ships and train engines, and also to create flakey croissants. Thus, baking croissants involves having a knowledge of physics and thermodynamics. Hey kids, don’t skip those physics classes – you never know where life will take you: one day you could design a rocket, or. . . . hmmm. . . bake a fancy croissant which is considered to be the Holy Grail of French (Austrian) baking.

The mechanics of a successful croissant involves using cold and pliable butter. The dough and the fat should be as close to the same texture and temperature as possible. Butter that is too cold will crack and break into small lumps, and butter that is too soft will result in a pastry lacking flakiness. While baking, the water and the butter in the layered dough turn into steam that tries to escape. The fat gives the dough the necessary strength and protection to withstand the pressure of the steam, and also encourages gluten development. The imprisoned steam causes the dough to inflate between the layers, and gives volume to the finished pastry.

However, baking croissants is like doing the tango: having the passion and counting the steps without practicing – kills the dance. Unless you spend hours and hours folding and turning the pastry, all your knowledge and desire won’t deliver the perfect croissant, and you will be forever lost in the land of mediocrity, without redemption or parole.

While planning our trip to Paris, I had expressed my wish to spend time in a French ‘Boulangerie/Patisserie.’ Sharon and I fantasized that perhaps someone we knew, might know someone, who would know a baker, who would allow me to go behind the scenes in their bakery. As many of you know, I was on a quest for the ‘ flakiest croissant and the crustiest baguette in Paris…'(This turned out to be very difficult, because the gap between ‘very good’ and ‘excellent’ was almost non-existant).

There were three bakeries within a block of where we stayed in Paris. One of them was just around the corner, and was recommended by our friend. We went in on our first day there and while waiting in line, discovered that they had a charming tea room. We ordered, and asked the waitress whether there was an actual bakery on the premises, as they seemed to be in a residential, not a commercial area. She replied yes, and ten minutes later, the owner/baker, Alain Clerardin stood next to our table. In her charming French, Sharon explained to him that I own a ‘petit boulangerie’ in B.C., and his eyes lit up. It seems that 25 years ago, Alain and his wife worked in Toronto briefly, and then returned to Paris to start their own bakery, which has been open for the past 23 years. He immediately offered to show me his operation in the back of the shop. I was filled with excitement, but trying hard to maintain my cool. I thought to myself: “Here is a generous, down-to-earth baker, who, without me asking/begging/pleading etc., offers to take me into the holy-of-holies!” 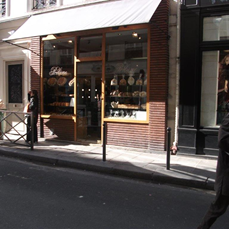 On that day I I started to believe in fate! His operation looked like a beehive, with 16 employees manning different work stations, including breads, baguettes, pastries, cakes, sandwiches, quiches, chocolates, and more. He walked me through the various stations and I casually mentioned my interest in the process of croissant-making. He introduced me to the pastry-maker who was in charge of producing all the doughs for the croissants, pain au chocolats, tarts and quiches, and mentioned that he starts work at 4 am. I thanked him and confirmed that I would be there the next day. The next morning, I rang the service bell at Alain’s bakery at 4 am., reporting for my apprenticeship. For the next 6 hours, I witnessed the ease with which French croissants could be made – it was like listening to Pavarotti’s effortless arias. . .I got firsthand experience rolling, twisting and pulling the pastry and I can tell you now, “it’s all in the wrist!”

Alain invited me to come back anytime, and despite the temptation to spend 24 hours a day at his place, I thanked him and declined the kind offer, because I was, after all, on vacation, and wanted to spend more time with my lovely wife.

When I started the quest for the flakiest croissant, little did I know that it would end here at home in my own bakery. Since I returned from Paris, I’ve made two attempts at crafting the perfect croissant. The second attempt was yesterday, as some of you who sampled them know. It was far better than the first batch, but far from perfect. After all, practice make perfect, and exercise makes excellence. . . .