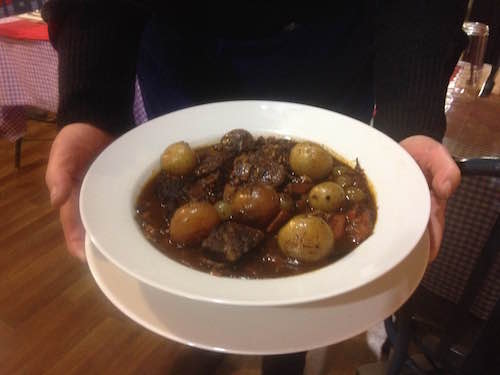 Fare la scarpetta is one of those awesome Italian sayings that don’t really have an exact translation in English. With fare, meaning ‘to do’, and scarpetta, meaning ‘a small shoe,’ we get, ‘to do the small shoe.’ What does this all mean you ask?!!

When you are done eating a dish that is made in some sort of sauce, you grab a piece of bread, and you Fai la scarpetta. That is, you drag a piece of bread in the leftover sauce, oil, or condiment that is on your plate: you sop up what’s left. Isn’t that so clever of Italian!? It’s like dragging your bread-shoe over the plate, picking up all that’s left over. Or in English, ‘licking your plate clean,’ but using a piece of bread to ‘clean’ the plate.

Two months ago, a young fellow walked into Walla and ordered Shakshuka for lunch. He was all excited, and at the end he mopped the pan clean with the bread.  “This is the scarpetta,” he said, as I watched his progress and mopping technique.  Since then, he’s come in religiously at least once a week and slowly sampled Walla’s entire menu, always leaving a shining plate behind.  Last Saturday he outdid himself with the sauce-laden Beef Bourguignon. I would define Walla’s cuisine as sophisticated peasant food, which begs for you to just grab a piece of bread and ‘do the scarpetta.’ I myself regularly enjoy eating bread with a large salad in which the chunky tomatoes, onions and cucumbers frolic happily next to plump Kalamata olives in a ‘sauce’ of green aromatic olive oil, so apparently I have been ‘fai la scarpetta’ for as long as I can remember. . . . It turns out that Joey is from Montreal, where his family owns an Italian restaurant. He hopes to make the Okanagan his home, and is looking for employment in his field as a civil/environmental engineer.  Meanwhile, by bribing him with all the bourekas he can eat, we managed to recruit him to man the front line at Walla’s command post at the market every Saturday starting in May.