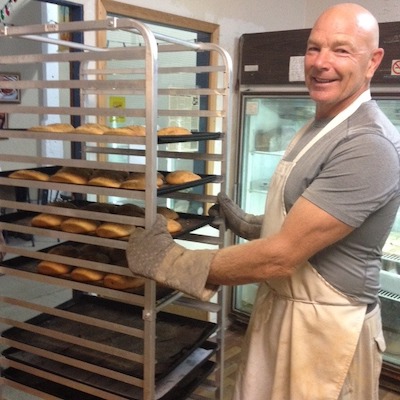 Back in April, after the decision was made to re-open Walla, I called for a staff meeting. It was a full house with all 4 of my employees present. These days I consider myself to be the official ‘Nobody’ at the bakery, while also performing the detested role of slave master. After unveiling the new ‘battle’ plan which included developing new products and the re-opening of the Bistro for brunch and lunch, I scanned the faces of the ‘four mutant ninja turtles’ for any visible emotions or vital signs of life. Leonardo and Michelangelo agreed to embark on the new journey, and Raphael joined them after being offered a full-time position. Donatello was squirming in his chair while making long faces and eventually gave me his piece of mind: “Walla is your dream, NOT mine – I don’t need or want to live it!” He stormed out of the room in a fit of rage, followed shortly by … Raphael. The bleak reality was that in less than 3 minutes, Walla had lost 50% of its production team! 2 mutants were gone and 2 ninjas remained . . .

I offered the ‘other’ Sharon to manage the front of the house, customer orders, purchasing, etc., to which she kindly agreed. For the next couple of weeks Walla limped along as we tried to re-group around the basic products while conducting damage assessment. Since we lacked capacity to produce pastries, Bourekas, buns, cheese sticks, pizzas and quiches, we made the difficult decision to be closed on Saturdays (the most lucrative day of the week). The financial fallout for this small business was catastrophic. We were now open only Wed.—Fri. and eventually, Tue.–Fri. Perhaps, in the larger scheme of things this was God’s message that I had been abusing the 4th commandment, “You shall remember and keep the Sabbath day holy.” Apparently, now would be the perfect time for me to return to the bosom of my people. Oy, after all, God does work in mysterious ways. What do I know? I’m just a baker.

One day, after we posted a ‘now hiring’ ad, Caravaggio, a long-time customer walked in, hugged me (a touching act of kindness which unfortunately I can no longer reciprocate) and expressed a wish to train and work with me at Walla. I had made a habit of discouraging all job applicants, for the purpose of vetting and screening, and this time was no different. The usual ‘shtick’ included: “I will be hard on you and demanding…You’ll be miserable, you’ll suffer and…I’ll make you cry”. Simply put, I was promoting the image of a professional ‘Ogre’. The ‘trick’ worked like a charm time after time; all those who ‘baked with their mothers and nanas’ left the building as soon as they heard ‘miserable….suffer,’ even before they heard the ‘crying’ part.

Caravaggio was not put off by the warnings. We sealed the ‘interview’ with another hug (hmm… these are quite addictive). And then there were 3. I was optimistic that the Walla show will be on the road again. Caravaggio had all the qualities of a good employee: motivation, dedication, initiative, competency and a love of good food. We developed new products and the future looked promising. Last Wed. at 12:15 pm. I corrected/criticized Caravaggio’s work in the kitchen, and when I went home at 1 pm. they became the latest casualty of ‘The Ogre’ (sound the bugle), leaving in tears and vowing to not return. This promising career ended after only 6 weeks of training. And then there were 2. .

Last Thursday Leonardo landed in the hospital for a few days (thankfully now recovered). And then there was 1: Michelangelo was left holding the fort! Our good friend Bruce the sailor (below) was visiting from the coast, so we enlisted him to meet us in the bakery in the early morning on Fri. for the sacred mission of baking the bread, buns, bagels and baklawa. Phew, we had made it through the week by the skin of our teeth. Never a dull moment or a lack of drama in the bakery. .